Rheumatoid arthritis (RA), and the debilitating symptoms it induces, has been documented for centuries.

At its core, RA causes the immune system to mistakenly attack the body. Specifically, the lining of your joints, called the synovium, is most often the first place RA strikes.

Rheumatoid Arthritis tends to be chronic and progressive, meaning that the disease worsens over time. Researchers have worked diligently to pinpoint causes, management strategies, and potential cures for RA.

Vitamin D’s connection to RA has been at the forefront of their research since the late 1930s. However, proper medical research takes a long time. There’s a connection between the sunshine vitamin and this chronic condition.

Over the decades, conflicting reports have been published on the topic. Excitingly, just recently in 2016, long-reviewed studies have concluded that there is a strong correlation between lower vitamin D levels and evidence of rheumatoid arthritis.

Moreover, researchers till now don’t know if low D contributes directly to the autoimmune disease. However, the potential role of vitamin D supplementation in preventing RA manifestation and its beneficial role as a component of RA treatment remain controversial.

The Connection Between Vitamin D and Rheumatoid Arthritis

Vitamin D (a secosteroid hormone), or vitamin sunshine, has a miraculous ability to promote health in our body.

The role of vitamin D in the immune system is not fully understood, but it is thought to play a role in regulating the activity of immune cells.

In fact, the medical community, as a whole, touts vitamin D as a foundational building block to good health.

Vitamin D can help regulate the immune system, ward off sickness and disease and if you’re taking medication that lowers immune system defenses it can help you from getting sick as often. -Karen Langston, spokesperson for the National Association of Nutrition Professionals

Other RA medications, such as Hydroxychloroquine and immunosuppressants are also linked to malabsorption of vitamin D. If you are taking these medications to treat RA symptoms and pain, it is important to have your levels checked regularly.

Rheumatoid arthritis is no exception.

As vitamin D deficiency has been linked to diffuse musculoskeletal pain, these results have therapeutic implications.

Vitamin D supplementation may be needed both for the prevention of osteoporosis as well as for pain relief in patients with RA. –U.S. National Library of Medicine, National Institutes of Health

Physicians and rheumatologists cannot say that healthy vitamin D levels will prevent or cure RA. Rheumatoid arthritis is far too complex with a multitude of variables.

Yet, there is enough evidence for doctors, scientists, and researchers to prescribe vitamin D to RA patients and those at risk for RA. 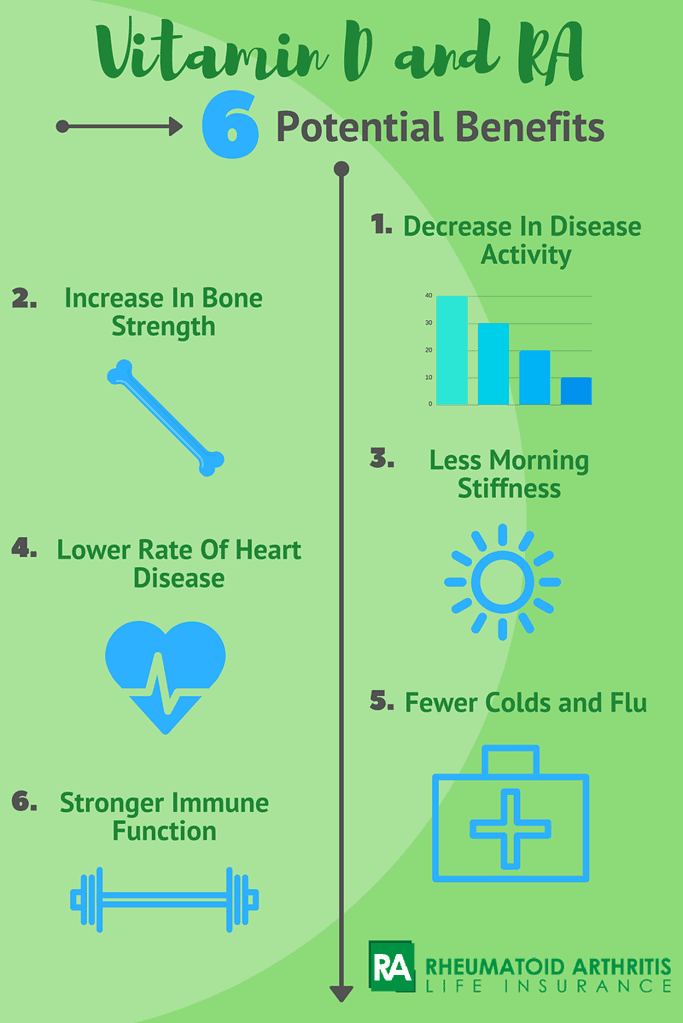 According to the National Institutes of Health, the general screening guidelines for vitamin D levels are as follows:

The test for vitamin D levels is simple and straightforward. The technical name is a 25(OH)D blood test. Your rheumatologist can easily order the test. Or, there are resources for at-home testing kits.

There is some evidence that getting more vitamin D may help reduce the RA symptoms, although more research is needed. A healthy diet alone won’t cure your RA symptoms.

However, many would argue it’s the best source of vitamin D, as long as you’re not at risk for sun damage and you’re receiving a safe exposure amount.

The right dose differentiates a poison from a remedy. –Paracelsus, German-Swiss Physician (1493-1541)

Generally, about 10 minutes of daily sun exposure is adequate to boost and maintain your vitamin D to healthy levels. Depending on your skin tone, a little less (fair skin) or more (darker skin) may be needed.

2. Food: Few foods naturally contain vitamin D. Cod liver oil (remember Nana, the dog, trying to give the kids a dose in Peter Pan?) and fatty fish are considered some of the best sources. Eating fish at least twice a week is associated with lower disease activity in RA patients, a study in Arthritis Care & Research found.

While the two forms have scientifically been regarded as equivalent in their ability to treat vitamin D deficient conditions, such as rickets, D3 is recommended more often.

There is a plethora of logical reasons for advocating the use of vitamin D3 over vitamin D2 dietary supplements including: UVB light from the sun strikes the skin, and humans synthesize D3, so it is the most “natural” form.

If you can’t get enough vitamin D from sunlight and diet alone, your doctor may suggest taking a vitamin D supplement. Talk to your doctor before taking any high doses of vitamin D. Yes, spending time in direct sun exposure for just 15 minutes can boost your D levels.

Studies have shown that insufficient levels of vitamin D are associated with increased rates of rheumatoid arthritis symptoms.

When vitamin D levels are raised to normal ranges, researchers find that symptoms of RA are reduced.

Controversy still remains over what medical experts believe are appropriate levels of vitamin D. However, it is agreed upon that high-risk populations, like RA patients, should have their vitamin D levels monitored.

We specialize in working with clients with rheumatoid arthritis find the highest quality protection at the best prices available. If you have RA and are seeking out life insurance, it’s crucial to collaborate with an agent with a deep understanding of RA.

At Rheumatoid Life Insurance, our job is to be your advocate. As an independent life insurance agency, we will cross-reference the top-rated life insurance companies to find the best rate for which you can be approved.

To get started, fill out our Instant Quote form

We work with individuals across the nation to secure the best life insurance rates.

This entry was posted in Advice, Of Interest. Bookmark the permalink.